A response from a Star Trek legend 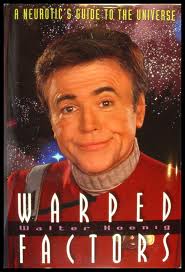 
Most famous for playing Ensign Pavel Chekov on the classic TV series "Star Trek", Walter Koenig is an accomplished actor and author. He sent me a very nice reply to my letter asking him about the ups and downs of a career in show business.  This is what he had to say:

Thanks for your note. Obviously, there are no easy answers to building an acting career. If there were I wouldn't have experienced years of unemployment at different stages in my life.

If there is any one thing I can tell you it's to create your own opportunities as much as it is humanly possible. That would involve taking classes for networking as well as growing, audition for every play that comes along and checking out the independent film making scene in New York and surrounding environs. I know there are groups on the West Coast like Filmmakers Alliance which is an acting-writing-directing-producing cooperative. People there get together to work on their own and others low budget projects. Anything from short-shorts to docs and features are made through these kinds of collectives. You meet people, learn how to make your own projects and the films do get seen at festivals, etc.

I'm not sure I have words of encouragement that can be generally applied as a blanket statement. Some things work for some people and some things don't.

Perseverance, no matter how you manage it, is the primary quality, aside from talent, that you must have. Perhaps knowing that everyone suffers rejection in this business will be somewhat consoling and, then again, perhaps not. My ego is as easily bruised as the next person's and I've suffered feelings of total defeat, feelings that at the time had me on the brink of quitting forever.

On the other hand, there is some kind of mechanism operating in my brain that allows me to languish in consuming self-pity for a few days and then lets up sufficiently to try again. There is no exercise, ritual or mantra that I use for this to occur. It just happens, so I'm no good at offering a way to others of climbing off the canvas again and again over the course of many years to keep plugging away. You have to find it in yourself.

I believe you are in your forties, so I imagine that by this time you've come up with your own way to deal with vagaries of show business career experiences. I guess the one thing I would suggest, as I have suggested to others, is to always have another means of making a living (like writing a book) not only from the aspect of economic survival but as something which, while supplying you an income, will also support your self-esteem. It's extremely important to keep your confidence up while pursuing your passion and that comes from inner strength.

When things were at their worst for me career wise - which was after the TV series was canceled - I gave myself the regimen of sitting down several hours a day and writing. It brought structure to my life and gave me a goal that I could direct my energies toward. It doesn't have to be writing of course, it can be anything whether it's creative or not that gives you focus and some measure of satisfaction in the process of working at it. It will also, as I mentioned earlier, provide an income.

You might want to check out my autobiography called "Warp Factors, A Neurotics Guide to the Universe." It certainly holds no direct answers but it might give you some comfort knowing that you're not out there alone. It's probably available at Amazon.com for just a few bucks.

That's pretty much all I can offer Chris.

The best of good fortune to you.

I sent him a thank you note the next day
Posted by The Actor's Detective at 2:30 PM