What are The "Glengarry" Leads?

If you read this blog often or read the Actor's Detective newsletter, you'll see references to the "Glengarry Leads." So as not to confuse readers that aren't familiar with the reference, we're going to use this post to explain the significance to actors. (Aside from it being used in one of the best pieces of modern playwriting/screenwritng, that is.) 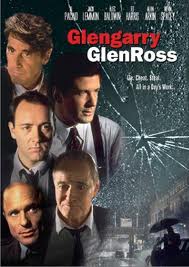 In 1984, David Mamet introduced his masterwork "Glengarry Glen Ross" to the theatrical world. It won the Pulitzer Prize and the Tony Award and ran on Broadway for almost a year. In 1992, it was made into a film which has become a cult classic and features powerful performances from some of the best actors in the world. (Pacino, Lemmon, Spacey, etc.)

Ostensibly about a Chicago real estate broker's office, the themes of the play (and movie) apply to any situation where sales are necessary or demanded to sustain a successful career. All the brokers in the office are competing against each other for a small slice of the market and few available prospects (sound familiar?) Some are more natural salesman than  others, but it's not really about their talent or skill, it's about the information they get (the leads) on prospective customers and who gets them first.

Ethics fall by the wayside as brokers are willing to lie, cheat and steal to win the stack of golden leads, or "Glengarry" leads (named after a hot property the office is due to sell which will almost immediately be snapped up by clients on the lead cards.) Whichever salesman gets to those people before the others do will be sure to close and get lucrative contracts and bonuses.

Since then, "Glengarry Leads" has become a synonym in the sales world for a list of hot prospects, or strong potential clients. It also refers to leads which have been undiscovered by other salesmen, allowing whoever finds them to be among the first to offer their product and close the sale.

How does this relate to actors and performers? Like it or not, you are in a sales business. You (and your talent) are the product you find yourself marketing on a daily basis. Change the words "offer their product" and "close the sale" in the sentence in the paragraph above to "audition" and "book the role" and you see where we are heading with this.

To an actor, the "Glengarry Leads" in question is getting any bit of information about productions coming up, and the key players involved in that production, before other actors get wind of it. Think about it. Once every other actor hears about a show, and casting directors put out the breakdowns for the whole world and the trade papers to see, the race is on for audition spots. Producers and directors then become inundated with headshots and resumes and the probability of you standing out diminishes. If you get your information to these powerful industry folks long before everyone else does, you have a greater chance at success than your peers.

While the play is terrific, there is a cameo role in the "Glengarry Glen Ross" film adaptation that was created specifically for the movie, and played to perfection by Alec Baldwin. It is that of a company enforcer named Mr. Blake who comes in to light a fire under the sales staff. He holds the stack of neatly tied cards with the  "Glengarry Leads" up to tease and tempt the staff and says that they will only go to the salesman with the highest profit that week. The person with the second highest sales? A set of steak knives. For the person who comes in third? Nothing at all. In fact, Blake says that anyone who doesn't place in the top two will lose their jobs. Truly cutthroat.

Once again, this applies to our business. For most roles, there is a job for the actor playing it and a standby (or "on hold") actor cast. No third place prize. You need a thick skin to deal with this reality, but your ratio of "pitches to sales" conversions (or, translated for a performer: "inquiries/submissions to auditions/bookings") can go up if you have the right leads. Chasing the leads everyone already has can prove futile, or be a lot of work with little return for the time invested. Obtaining leads that are new and/or unavailable to the masses and then following up on them will create more golden opportunities to sell your wares. There are, of course, no sure things, but "Glengarry Leads" are as close as they come.

The leads published every week in the Actor's Detective newsletter are of the Glengarry variety. If you can find a lead all over the place already and your peers are submitting in droves, you won't see it in the Actor's Detective. We only print leads that the masses don't know about, and we include contact information for major industry players, which others don't.

Finally, Alec Baldwin's character offers two acronyms that all salespeople (including you) should keep in mind:

Closing a sale (booking a role) should never be far from your mind. No matter what you do during the day, you should always be putting yourself in the greatest position for success. This includes investing in and tending to your marketing, and consistently reaching out to those who are of greatest influence in the business to let them know about you and your talents.

First, get the attention of your potential clients (by say, perhaps, following up on leads in the Actor's Detective and mailing letters to them.) Pique their interest with a well crafted, business like letter, give them all the information needed to make an informed decision about you, and -most important - give them a reason to reply back or, better yet,  bring you in (a call to action.)

Powerful stuff, and it's easy to see why Mr. Mamet's play and movie have resonated so much.

So now you know. If you see us referring to our product as "Glengarry Leads" we don't mean to brag, but we are assuring you that they are of the highest quality and well worth your investment. Mitch & Murray and Mr. Blake would be proud, and Shelly "The Machine" Levine and Dave Ross would do anything to get them. (Seriously, if you haven't seen the film or read the play, go get them now.)

Now if you'll excuse us, we're off to the local Chinese restaurant to have dinner with Ricky Roma. He says he's got something really important to talk to us about, oh and that we should bring our checkbook (wonder why he said that?) 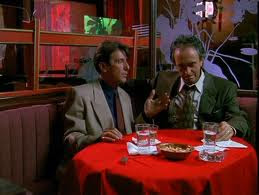 Posted by The Actor's Detective at 7:57 PM