Today marks the unofficial beginning of the campaign for President of the United States with the caucus voting in Iowa. For the next ten months we will be hearing a lot from candidates on both sides of the aisle.

What does this have to do with an actor's career, you ask?

As the wise man Yogi Berra once said, "You can observe a lot by watching."

No matter your feelings on politics, there are many great lessons to be found for performers in the way that politicians market themselves, and how effective those campaigns are. Follow their strategies for success, and apply them to your career, and you will probably find yourself elected cast too.

Here are just a few of the lessons:

1) Get your information out there (repeatedly)

One of the big laments of the political season is that we are inundated with commercials, robo-calls and mailings well before Election Day arrives. By the time we get to the finish line, we are almost relieved that we won't have to hear from them again.

I'm not suggesting that you market yourself to the point of annoyance, but there is some benefit to letting people know who you are - and more than just one time. A candidate who does just one mailing, or less than a handful, would not last long on the public's radar. Out of sight, out of mind, as they say.

If you are not getting your information in the hands of producers, directors and casting directors again and  again and again, you are similarly hurting your chances for success.

One of the reasons that candidates don't follow through with a sustained marketing blitz is that they run out of funds in their "war chest." Face it, nobody likes to admit that money makes the world go 'round, but it does, and it is crucial to getting ahead in any business, including ours.

If you are not putting money aside for your marketing efforts (postcards, mailings, photos, postage, etc.) or don't see it as a priority, then you are setting yourself up for sure failure.

Just like the candidate making his concession speech, you will soon be telling yourself and your supporters that the race is over and that you give up.

Don't be that person, invest in your business/marketing campaign and find ways to build that war chest.

3) Have something important to say.

If a candidate stood up and said "I'm running for President this year, please vote for me." and then said nothing else, he or she would not get too far. Why, then, should an actor expect positive results when their entire campaign consists of sending just a few headshots and resumes with no follow up or message?

If you are going to contact someone of influence in show business, be sure that you let them know your credentials (beyond the lines on your resume) recent work, skills, qualifications for the job, etc. Let them know more about yourself (professionally, of course, they are not interested in what new tricks your cat can do, or how your summer vacation went.)

Just like voters deciding on a candidate, a producer, director or casting director will not make an informed choice about which actor to cast without knowing as much information about them as possible. Make sure you get that information about yourself in their hands.

This one goes right along with the last lesson. It's great to be consistent with marketing, and to let "voters' know all about yourself, but you also have to be aware of who you are marketing to. Don't waste time, effort and (most important) resources sending your information to someone who would not hire you in the first place.

To put it in political terms, there are people in each party who would NEVER vote for a candidate from the other side, no matter how many times they reach out to them, so candidates don't bother campaigning in areas or states where those voters live. It's not worth the effort to pick up a tiny fraction of votes.

If you are a male in your twenties and you keep sending postcards and headshots to someone who primarily casts children or female senior citizens, you are needlessly diverting energy that could be spent elsewhere. Sure, these folks might cast your type once in a blue moon, but is it really worth keeping them on your mailing list?

Politicians have entire teams helping them with this. They need to make sure that the image and message they broadcast over and over again stays the same, no matter where they are, who they are speaking to or what the occasion is.

You probably don't have a huge team (other than your agent/manager or supporters) but you know what image you are trying to promote. Make sure you don't stray from that. Politicians get in trouble when they try to be all things to all people and to tell audiences what they think they want to hear.

Don't fall into that trap. 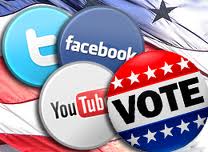 It is tempting, but you need to make sure that the people that are doing the hiring and casting in this business have a clear understanding of who you are, what your image is, where your talents and skills lie and how you are able to help them by filling a need in their casting process. Too many shifts in your marketing strategy will muddy the waters and confuse them. You will be seen as a "flip flopper", which has been the kiss of death for candidates for hundreds of years and will certainly harm your career too.

Do these things and you will be well on your way to  The White House  career success. You have our vote!
Posted by The Actor's Detective at 10:48 AM